A Parade of Four Planets and the Old Moon

Throughout the month of May, a beautiful display of planets could be observed in the morning sky just before sunrise. Last May 2 – a day before the New Moon- the 1% thin waning crescent Moon joined the four naked eye planets in a very spectacular morning sky show.

This planetary display was quite difficult to observe in a residential place like ours because we were surrounded with several houses which blocks my view of the sky near the horizon. Moreover, as this event occurred near sunrise the view of the planets and the very thin Moon were easily spoiled by the glare of the rising Sun.

Hence, I never expected so much in my attempt  to observe this celestial grouping.

Fortunately, a friend and orgmate told me that she was able to witness the event and take nice images of it from the roof deck  of their house in Marikina City. She was lucky to have a clear view of the eastern sky from that vantage point. 🙂

I almost cried with joy when I saw her pictures! 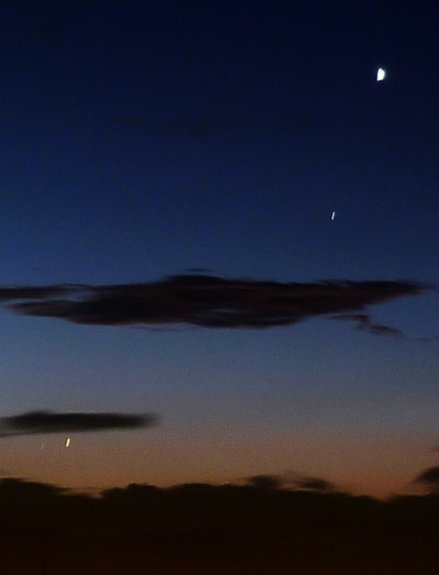 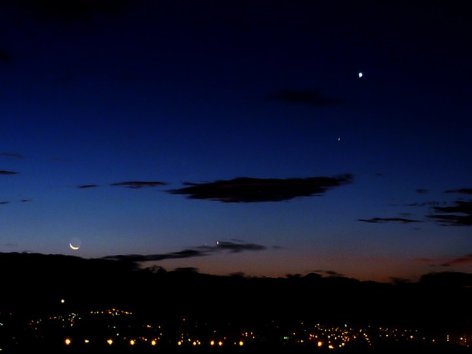 The Old Moon, planets and the city lights during dawn 🙂 Image taken at 5:29 AM. Click on the image for hi-res version.

Do you now understand why? 🙂

All images were taken by Bea Banzuela and were reposted with her permission.

Camera used was Panasonic Lumix DMC 10.1 mp digital camera (This camera possesses a remarkable capability of taking wide-angle shots just like the ones above!)

This entry was posted on May 9, 2011 by cosmicwanderer05. It was filed under Amateur Astronomy, Astronomical Events, Astrophotography, Conjunctions and Celestial Groupings, Moon, Philippine Astronomy, Planets, Telescopes and Other Observation Equipment, UP AstroSoc and was tagged with Astrophotography, celestial grouping may 2011, May 2011 planets, Moon and the planets, old moon, Panasonic Lumix Camera, planetary alighnment 2011, planetary alignment, planetary conjunctions, planets in the morning sky.