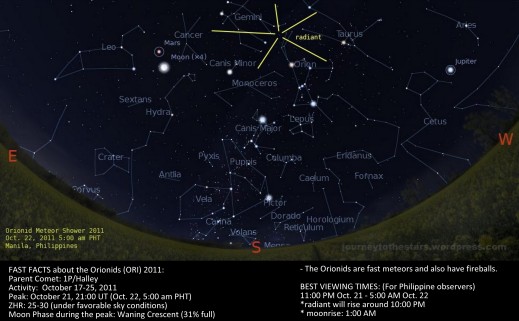 This year’s Orionids will peak on the evening of October 21/22 . These meteor fragments radiate from the top of Orion’s upraised club, near the Gemini border.

The cometary debris left behind by Comet Halley — bits of ice, dust and rubble — create the Orionid meteor shower. It last visited Earth in 1986. As the comet moves through space, it leaves debris in its wake that strikes Earth’s atmosphere most fully around October 20-22. Around this time every year, Earth is more or less intersecting the comet’s orbit.

Meteor specialists have meteor counts for this pass averaging a modest 20 per hour under dark skies.  The moonlit glare of the waning crescent Moon, however will probably reduce the numbers somewhat this year.

The best time to view these meteors is usually in the wee hours before dawn. That time holds true no matter what time zone you’re in.

Clear skies to all and happy viewing! 🙂

This entry was posted on October 16, 2011 by cosmicwanderer05. It was filed under Meteor Showers, Sky Viewing Tips and was tagged with comet halley, meteor shower guide, orionid meteor shower, Orionids 2011, skyviewing tips, stellarium.