Crescent Moon, Venus and Jupiter at Predawn on July 15th 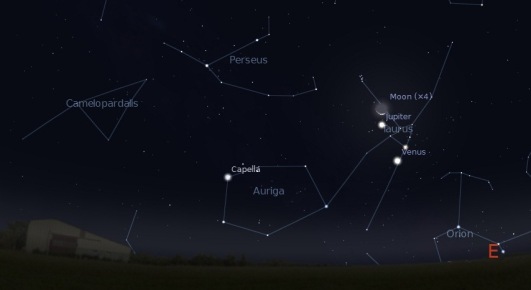 Philippine sky observers will have a great chance to see all of the three  brightest objects of the night sky in close proximity to each other this weekend (weather permitting). On the morning of July 15th, the waning crescent moon will join the very bright “stars” Jupiter (upper) and Venus (lower) to form a nice celestial grouping, along with two prominent open star clusters — the Pleiades and the V-shaped Hyades —  in the constellation Taurus.

Venus has reached its greatest illuminated extent in Earth’s sky last July 12. Thus, it appears so dazzling now as a “morning star”  in our predawn sky, near Jupiter.

Meanwhile, in other parts of the globe, this celestial grouping event will be viewed as an occultation of Jupiter by the moon. An occultation is an event in which a celestial body covers another, farther away object, such as when the moon covers a star or a planet or when a planet or an asteroid covers a far away star. For this event, the moon will cover Jupiter for about an hour (the exact time and durtaion of the occultation is  dependent on the observer’s location). View the visibility map and timings of this event from IOTA.

Seeing Jupiter’s occultation is possible with the naked eye, but the look through a telescope, even using a small magnification, is marvelous. At first, two of Jupiter’s large moons (Io and Europa) will disappear behind the moon, then Jupiter will disappear and then the other two moons (Ganymede and Callisto).

Places close to the southeast will witness a ‘grazing occulation’ when Jupiter and its moons will skim the edge of the Moon. This will be well worth seeing through a telescope and Jupiter’s moons may be seen blinking in and out of view as they pass behind the lunar mountains. Further north and west a very close conjunction will be seen.

Don’t worry because even though we won’t be seeing this event in the Philippines this weekend, we are still lucky enough to see a very rare version of such an event next month, during the morning of August 12, 2012. That will be surely worth getting up to see!

Observing occultations can also contribute to science. During the 80’s, Uranus occulated a distant star. Photos of the events showed that just before and after the occultation the star blinked several times. The theory then was developed that Uranus has a set of rings (like Saturn). When Voyager 2 reached Uranus it detected and photographed the predicted rings.