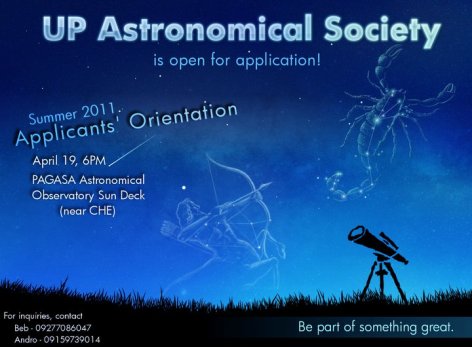 The University of the Philippines Astronomical Society is now open for application this Summer 2011.

Currently enrolled UP Diliman students are invited to join us in our mission to promote astronomy.

Ad astra per aspera! – The UP Astronomical Society

The title above is a Latin phrase which means, “To the stars through difficulties..”. This phrase is also the motto of my beloved university-based astronomical organization, UP Astronomical Society which has just celebrated its 19th anniversary last week.

True to its objectives, the organization strive for years to promote astronomy among students and the general public. It partakes in several astronomy activities throughout the academic year. These include astronomy classes, observing sessions, public astronomy lectures, exhibits and forums.

I was once given a chance to serve as an officer of the organization and I was able to observe how it develops.  No activity or project must have come to fruition without the great efforts of its members who worked hard with dedication for its events. I would say that the diversity of its composition which was united with the common goal and interest helped UP Astrosoc to grow to what it is now.

UP Astrosoc members while observing the Partial Solar last January 15, 2010 near the Manila Bay (photo by Aaron Misayah)

In celebration of its 19th year, the organization opened its tambayan (headquearters) which is currently located at the PAGASA Astronomical Observatory in the University of the Philippines – Diliman in Quezon City. Free screening of the movie, “Contact” which was based on the novel by Carl Sagan was offered to everyone with free popcorn and refreshments 😀

As part of my tribute to the org, I would like to quote Mr. Bamm Gabriana, one of its founding members, who shared a tidbit of the UP Astrosoc history.

“The original UP Astrosoc started in Manila in 1935, and was founded by Professor Alejandro Melchor after whom the College of Engineering building in Diliman is named.

Their tambayan was the original Manila Observatory in Padre Faura. That observatory had a 19-inch telescope, an inch larger than the 18-inch PAGASA telescope in our tambayan. That telescope was destroyed during the war. Soon after, the original UP Astrosoc ceased to exist, and the UP system moved to Diliman,

I’d like to think that, in a way, the founding members including myself merely revived the original UP Astrosoc.

Knowing this made me feel prouder of my org 😀 It’s nice to know that even before, people including the great Prof. Alejandro Melchor, have already made efforts in creating an astronomical organization in the university. Thus, maybe just like us now, they see astronomy as a very interesting field that’s why it should be widely promoted especially among students through an established astronomical organization which shall be dedicated to the job.

Currently enrolled UP Diliman students are invited to join us in our mission to promote astronomy.

Applicant’s orientation will be on July 9 and 13, 6pm at the PAGASA Astronomical Observatory (near CHE).

For inquiries, please contact Julee at 09154927295 or email us at upastrosociety@gmail.com

Below is the org’s cool audio-visual presentation, featuring its members, for the applicant’s orientation last year.