The Southern Taurids Meteor Shower plus some possible “Hartley-ids” 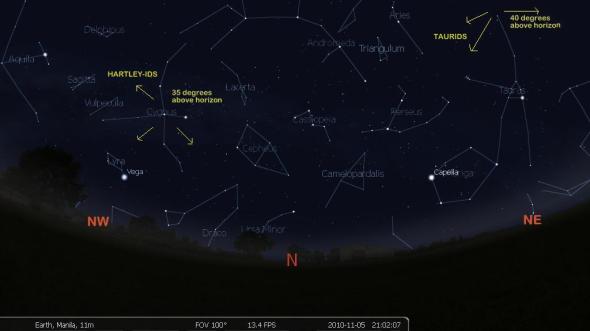 This week, watch out for the Southern Taurids Meteor Shower and some possible “Hartley-ids”!

The South Taurids are extremely long lasting (September 17 – November 27), but usually don’t offer a whole lot more than about 7 meteors per hour, even on the expected peak date of November 5. They are known  as “Halloween fireballs” because of its association with the meteors seen during Halloween and also for its  cool pumpkin-colored slow moving fireballs.

The greatest number of meteors generally fall around midnight to one in the morning, when the constellation Taurus the Bull rides high in the sky. Just remember that under any dark sky on any given day a person can see about five meteors if conditions are optimal. Southern Taurids meteor streams are groups of meteoroids originating from dust grains ejected from Comet 2P Encke.

Also on this week, there is a possibility of a “Hartley-id” shower coming from Comet 103P/Hartley – which has put on a good show for backyard astronomers last month — according to NASA’s Meteoroid Environment Office. If there is a Hartley-id shower, it would emanate from the constellation Cygnus the Swan, visible to observers in the northern hemisphere almost directly overhead after sunset in early November. NASA’s Epoxi mission will sweep past the Hartley 2 comet on Thursday (at about 2:00 PM UT) and take detailed measurements and images.

Lunar interference should not be a problem in observing these showers. Fortunately, the new moon falls on November 6, thus providing dark skies for a meteor watch.

Like the South Taurids, the Northern Taurids shower is long lasting (October 12 – December 2) but modest, and the peak number is forecast at about 7 meteors per hour.