The final mornings of 2010 (during Dec. 30 and 31) will feature the waning crescent moon with the planets Mercury, Venus and Saturn in the eastern sky before sunrise. 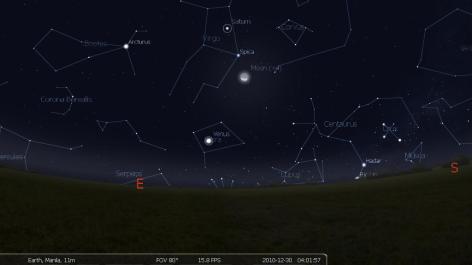 Depending on where you live worldwide, Venus and the moon will rise above the eastern horizon some 3 to 4 hours before sunrise, to light up the wee morning hours until daybreak. For Philippine observers, the screenshot from Stellarium above shows that the Moon – Venus separation is ~20 degrees on December 30, 2010. During this time, the moon will also be ~20 degrees below Saturn. The bright stars Spica in Virgo and Arcturus in Bootes could also be found within this celestial grouping.

Venus is very bright and easy to find. If you look at Venus with a telescope before dawn, you’ll see this planet shining as a wide waxing crescent.

By December 31, the moon and Venus will shine nearly side by side with only 10 degrees of angular separation. Also on this date, Mercury which was in evening dusk during early December will now be in the predawn sky, closer to the horizon. In the screenshot above, it was ~8 degrees above the horizon and ~25 degrees away from Venus. December 2010 provides you with the unique opportunity to catch Mercury in both the evening and morning sky in a single month. Using binoculars will help you see this tiny planet.

Clear skies to all! 🙂

Note: The general rule amateur astronomers use is that the width of your fist from top to bottom held at arm’s length equals about 10 degrees. Read more about this here.