October’s Full Hunter’s Moon nearly coincides with the apogee of the moon’s orbit, or the point at which the moon is farthest from Earth. That makes October’s full moon appear smaller than usual, the opposite of the “supermoon” effect that occurred earlier last March when the moon was full during its closest approach to Earth. 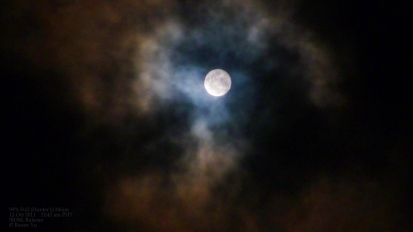 The moon reached its peak fullness at 2:06 a.m. UT last Oct. 12. Shortly thereafter, the moon was at its farthest point from Earth, which it reaches once a month. The moon’s orbit is elliptical rather than perfectly circular, which is why the distance from Earth to the moon varies by tens of thousands of miles depending on the time of month and year. The moon’s orbit is also always slightly changing because of differing effects of the sun’s gravity.

Though we couldn’t notice with our own eyes, the Moon’s apparent size changes throughout the year and this is because of the phenomenon called Lunar libration, or the wobbling of the Moon.

Below is an animation which demonstrates this effect. It shows the geocentric phase, libration, position angle of the axis, and apparent diameter of the Moon throughout the year 2011, at hourly intervals.

It is said that the Moon keeps one face toward Earth, and that we see only 50% of the lunar surface. Actually, a slight rocking motion, called libration, makes about 59% of the Moon’s surface visible from our planet Earth — though only 50% at any one time.

There are various causes for libration and there are also different kinds of libration: libration of longitude (the Moon’s east-west wobble) and libration of latitude (the north-south nodding). Your location on Earth  has some, but significantly less, bearing on latitudinal libration. If you reside at far northern latitudes, you see further north on the Moon than someone in the Southern Hemisphere. Likewise, someone in the Southern Hemisphere sees more of the Moon’s southerly features.

Last month of October, Mr. Michael Peterson, a fellow amateur astronomer and astrophotographer, invited us to do a near-synchronous photography to observe and compare lunar libration and lunation from two different locations – here in the Philippines that is much nearer in the equator and in the more northernly U.S.A.

Their location on the other side of Planet Earth gives me the idea to invite them to a little experiment: During these next couple of months, on and near the time of Full Moon, the Moon will be favorably placed so that it can be seen easily at the exact same moments both here and there. It would be in my western sky before dawn, and their eastern sky in the early evening of the same day, as they are currently 13 hours ahead of me (in early November that will change to 14 hours when we set our clocks back in the USA). Perhaps we could attempt to create the world’s largest pair of binoculars with some near-synchronous lunar photography, and see whether there’s a visible difference in what we can each see around the edge of the Moon!

He has already done several lunar libration experiments which he did by observing lunar photos that he took by himself using his trusty 8″ f8 homebuilt reflector telescope, 25mm eyepiece, and LG VX8360 cell phone camera. You can visit his blog to see more of his posts with accompanying images and nice explanations which could aid you in understanding the topic well. Aside from doing lunar observation, he also does planetary imaging of the planets Venus, Jupiter and Saturn.

My friend Andre Obidos, who loves taking pictures of the Moon, and I were very excited about this for we are also interested in the phenomena; and so we immediately planned to take images every day. Unfortunately, typhoons visited the country during this month which prevented us from continuing the work. 😦

Anyway, here some of the photos which we were able to image when the sky is clear. You may click on the images to see hi-res ones. 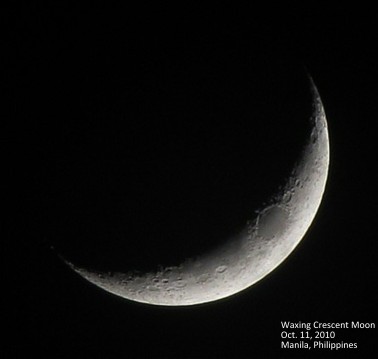 Angular diameter was taken using Stellarium while the percent illumination, distance and age were computed from here.

Hopefully, we could get back on track this month of December. 😀

Meanwhile, I’ve included here a gif courtesy of Astronomy Picture of the Day (APOD) showing what our Moon looks like during a lunation, a complete lunar cycle.

As the Moon orbits the Earth, the half illuminated by the Sun first becomes increasingly visible, then decreasingly visible. The Moon always keeps the same face toward the Earth. The Moon’s apparent size changes slightly, though, and a slight wobble called a libration is discernable as it progresses along its elliptical orbit. During the cycle, sunlight reflects from the Moon at different angles, and so illuminates different features differently. A full lunation takes about 29.5 days, just under a month.