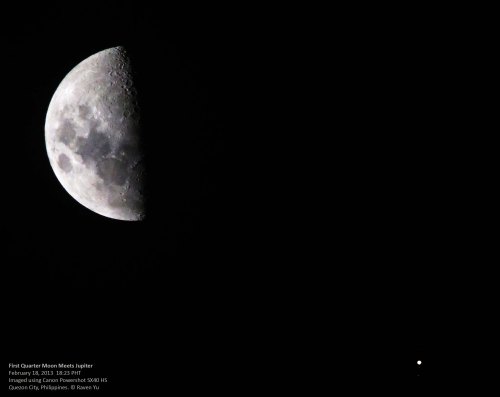 On my way home after attending tonight’s Christmas Day Mass, I saw a faint ring or halo around the Moon. Lunar halos often result when moonlight enters randomly- oriented hexagonal ice crystals in wispy cirrus clouds. Refraction of light produces a 22 degree ring or halo around the Moon. In order for a halo to appear, the Moon must be at least 22 degrees above the horizon. Interestingly, Jupiter was also positioned inside the 22 degree halo on this night near the waxing gibbous moon.

Lunar halos usually indicate that a bad weather is on it’s way. In the Philippines, a new tropical depression is expected to bring heavy rains across central part of the country in the next few days.