March 5, 2012 – This would have been a very fine evening for skygazing if only the clouds weren’t so annoying.

Various sky events were happening all at the same time, but nothing can be seen but the clouds.

This day marked the closest encounter of Mars to Earth until the year 2014. Mars is now displaying its greatest brilliance in our sky. Also on this day, the planet Mercury arrived at its greatest eastern point, 18 degrees to the east of the sun. This was Mercury’s best eastern apparition in 2012.  In addition, a bright ISS (almost as bright as Jupiter) passed near Venus at around dusk. It was a nice opportunity to capture this ISS pass because of its proximity to two of the brightest objects in the night sky this month.

I was originally planning to take photos of Mars and Mercury during twilight – Mercury in the western sky, and Mars on the eastern side – but as I said, thick clouds came in and obscured my view. 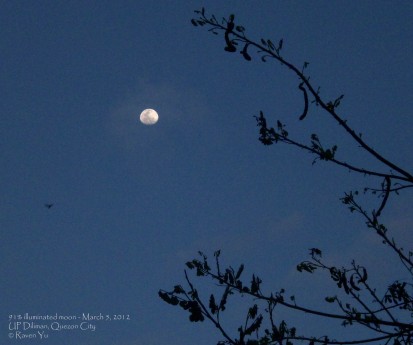 Waxing gibbous moon at 6:01 pm. I took this photo while waiting.

Mercury, now shining at magnitude -1.2, is only a little fainter than Sirius (the brightest star in the sky). Though this planet is often cited as the most difficult of the five brightest naked-eye planets to see, there is now a fine “window of opportunity” for seeing Mercury in the evening sky. This window which began last February 22 and will close after March 12, provides several good opportunities to see this so-called “elusive planet” with our own naked eyes.

Locating Mercury in the west after sunset is quite a  challenge because it’s so close to the horizon. Moreover, although it is actually as bright as a first-magnitude star, the glow of evening twilight tends to subdue its brilliance.

This month, Mercury starts become visible around 30 to 45 minutes after sunset. This tiny planet can be found hanging beneath the brighter planets Venus and Jupiter. Using Stellarium, I estimated its location to be about 25 to 30 degrees below Venus. It was hard to spot Mercury at first glance but after a few seconds, my eyes were able to detect its faint glow.

However, it was visible only for a very brief moment.

As soon as I finished setting up the tripod and the camera, the clouds have already covered about 5 degrees of the horizon and Mercury was nowhere to be seen. 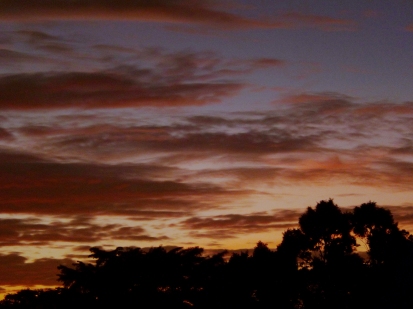 Western sky - March 5, 2012. Mercury was hidden beneath those clouds near the horizon.

I tried my luck to look for this planet on the following evenings but the sky was not any better until March 8.

Weather was not so bad as the past few days  so I was slightly optimistic.   The sun set promptly at 6:06 pm  and I searched in the same area of the sky, expecting to see Mercury.    After more than half an hour, Jupiter and Venus popped into the view – still there is no sign of Mercury.   A nice big full moon in the east was rising, and it seemed to grin at me cruelly!

I was just about to give in when at 6:40 pm, Mercury sailed into view;  flashing yellow and orange and battling the murkiness. Having just enough time to take a few photos before it disappeared a few minutes after, I hurried and managed to get off a few shots.

It was a pleasant surprise. 🙂 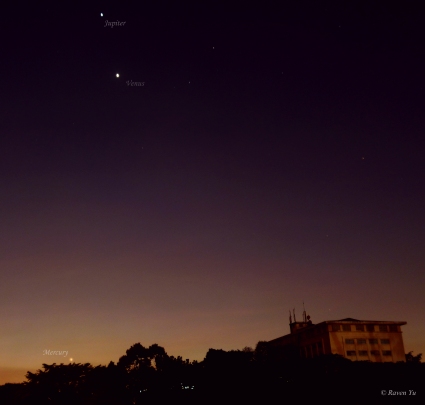 Jupiter, Venus and Mercury at 6:44 pm | UP Diliman, Quezon City 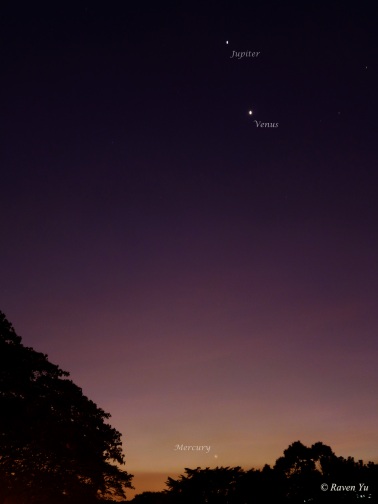 Photos above were taken using my Panasonic Lumix digital camera and were post processed in Photoshop to enhance the visibility of Mercury. The planet was too dim and too small to be seen without zooming into the images.

Mercury is quickly decreasing in altitude as each day passes, so take the opportunity well this month to spot it.