Mercury, Venus and the Young Moon at Dusk 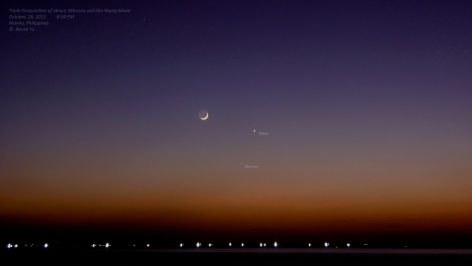 Last October 28, 2011 I immediately headed to the SM Mall of Asia after our 2-day sem planning in Makati to take an image of this nice celestial grouping shortly after sunset. Sleeplessness failed to hinder me 😛

It features the thin Young Moon and the two inner planets, Venus and Mercury hanging near each other in the western sky at dusk.

I was really fortunate to have been able to catch this sky display just before darkness came. *Traffic in the city really sucks.*

Anyway, I hope the skies will always be this clear. 🙂

Sunset, Contrail and the Thin Moon

I and my friend Bea Banzuela were walking around the Academic Oval of our university last May 5 when we noticed the sunset behind the trees at the lawn.

The transition of the bluish sky into crimson during this time of the day is always lovely to look at. 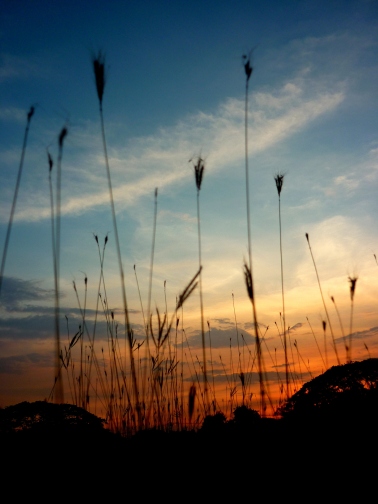 PHOTO OP! That’s me posing in front of the setting sun 🙂 Haha!

I remembered that the 2-day old thin Moon will set just before the Sun that afternoon. I checked Stellarium for its location in the western sky and waited until it became visible.

We soon found it hanging below a contrail a few minutes after the Sun had disappeared from view. It was around 5% illuminated and barely visible to the naked eye. 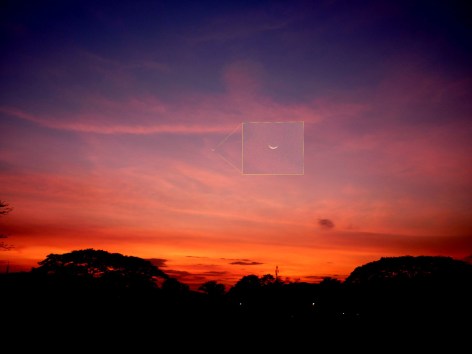 Luna appears against the crimson-colored sky. Click on the image to see the hi-res version.

As the sky grew darker, the Moon become more apparent, along with the bright stars located around it.

A stunning sight! The Moon with its 'ashen glow' (or earthshine) beside Aldebaran

Staring at the beauty of the night sky

We were grateful that we had along with us a nice point-and-shoot Panasonic Lumix DMC camera which works great when used for landscape photography. Using its starry sky mode, we were able to produce the images above even with minimal light. This setting allows for 15, 30 and 60 second exposures that is best for night sky photography. Other cameras often produce very dark images unless there is some amount of light out. (Thanks to Aaron Misayah for lending us his camera.)

I hope the sky would always be this clear. 🙂

The thin waxing crescent Moon (1.8% illuminated) shared the western sky with the planet Mercury (not visible due to the thick clouds) at dusk last December 7, 2010.

Every 29 1/2 days, the Moon completes one lunar cycle (new moon to new moon) in its orbit around the Earth. For the last few days of the cycle we have an “old moon” and then just after New Moon we have the chance  to see a “young moon”, a very thin crescent moon, just like this one, above the horizon after the Sun goes down.