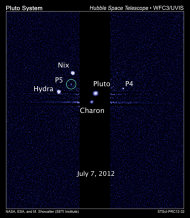 Sun-Earth Day is comprised of a series of programs and events that occur throughout the year culminating with a celebration on or near the Spring Equinox.

This year’s theme , ‘Ancient Mysteries-Future Discoveries’, opens the door to a much deeper understanding of our Sun and its impact across the ages.

Read more about SED 2011 and know how you can get involved in this project here.

The gif above shows the flare as imaged by the AIA instrument at 304 Angstroms on NASA’s Solar Dynamics Observatory.

Video caption: The X2 flare of Feb. 15, 2011 seen by SDO (in extreme ultraviolet light) enlarged and superimposed on SOHO’s coronagraph that shows the faint edge of a “halo” coronal mass ejection as it races away from the Sun. The video covers about 11 hours.

Instead, nothing much happened.

“There were some nice displays of aurora, but you had to live in the northernmost or southernmost part of the globe to see them.

The storm was so weak because the flare’s magnetic field happened to be aligned parallel to the Earth’s. When the sun sends a mass of hot plasma hurtling toward the planet in a coronal mass ejection, the plasma is imprinted with its own magnetic field separate from the sun’s. Astronomers can’t predict the direction of the plasma’s magnetic field until the burst hits Earth.

If the plasma’s magnetic field is parallel to the Earth’s, the incoming charged particles are effectively blocked from entering Earth’s magnetosphere. An identical flare with a perpendicular magnetic field would have triggered a much stronger storm.

“If the magnetic fields are parallel, then the shields are up. We are well protected,” said space weather expert Juha-Pekka Luntama of the European Space Agency Feb. 19 at the meeting of the American Association for the Advancement of Science in Washington, DC.

But next time we might not be as lucky with alignment, and we can expect up to 1,700 more storms like last week’s in the coming months as the sun wakes back up.

The Deep Impact probe zoomed to within 435 miles (700 kilometers) of Hartley and  it took incredible images of the comet’s solid nucleus. The close encounter marked just the fifth time that a spacecraft has ever visited a comet.

Experts say initial images from the flyby provide new information about the comet’s volume and material spewing from its surface. The small but active comet is full of surprises, with spinning jets, geysers of cyanide gas, and a strange, irregularly-shaped core. The nucleus is only about 2.2 km (1.4 miles) across, so there’s not much mass in it, which means that it has weak gravity. In fact, the round ends of the nucleus are bumpy and rough, indicating material is loosely aggregated there.

EPOXI is an extended mission that uses the already in-flight Deep Impact spacecraft. Its encounter phase with Hartley 2 began at 1 p.m. PDT (4 p.m. EDT) on Nov. 3, when the spacecraft began to point its two imagers at the comet’s nucleus. Imaging of the nucleus began one hour later.

I watched the coverage of this event through an online live steaming available at NASA TV. I was updating my Facebook and Twitter account as I was waiting for updates and images of the closest approach. After more than an hour since the webcast began, the first images that were taken many hours before close encounter were  received. They depicted the comet nucleus as little more than a point of light, with the fuzzy coma surrounding it. I was saving screenshots every now and then as the images came in.

First snapshot of Comet Hartley! Notice the jets that were clearly visible streaming from the peanut-shaped comet nucleus. This shape is common in asteroids and comet nuclei, according to astronomers.

Moments later, a few of the close-approach images were finally shown. I was really amazed upon seeing its odd peanut-shaped body with an irregular and contoured surface. Images are available here and here. According to NASA EPOXI’s tweet, the 55 images taken about every 15 minutes were 256 x 256 subframes and the 5 close approach are full frames 1024 x 1024.

This image montage shows comet Hartley 2 as NASA’s EPOXI mission approached and flew under the comet. The images progress in time clockwise, starting at the top left.  This was taken by EPOXI’s Medium-Resolution Instrument. The sun is to the right.  Image credit: NASA/JPL-Caltech/UMD

A nice animation of the five close-approach images above 🙂 image credit: planetary.org

Those bright streamers of light are jets of gas shooting away from the comet, formed when frozen material on the comet surface gets heated by the Sun, expands, and shoots away.

This image shows many features across the comet's surface. The length of the comet is indicated. There are two obvious regions of jet activity associated with rough terrain. Image credit: NASA/JPL-Caltech/UMD

These are medium-resolution; hi-res ones will be coming soon.

Scientists are interested in comets because they’re icy leftovers from the formation of the solar system about 4.5 billion years ago. Studying them could provide clues to how Earth and the planets formed and evolved.

Congratulations to the EPOXI team for a successful commetary encounter  and for sending amazing  images! 😀

Hartley 2 compared to other comets, and in motion 3D

Earth and Moon as seen from Mercury

A 'Double Planet' Seen From Mercury

A very amazing and humbling image 🙂

This was the latest view from NASA’s MESSENGER (MErcury Surface, Space ENvironment, GEochemistry and Ranging) spacecraft.

For the first time we see Earth as a fully illuminated superior planet 114 million mile outward from Mercury. Earth really looks like a double star because the moon is closely next to it.

“When I consider your heavens . . the moon and the stars, which you have set in place, what is man that you are mindful of him?” Psalm 8:3

SEEING THE MOON… in a whole new light

2009 was a very big year for lunar exploration. Lunar Reconnaissance Orbiter (LRO) began orbiting the Moon, returning more amazing images and more digital data in its first year than any other planetary mission in history. Meanwhile, Lunar CRater Observation and Sensing Satellite (LCROSS) crashed into the Moon’s south polar region in an unprecedented search for water below the Moon’s surface.

International Observe the Moon Night (InOMN) – September 18, 2010 – follows NASA’s first celebration of these historic missions as part of the International Year of Astronomy 2009 in public events called “We’re at the Moon!” (for LRO) and “National Observe the Moon Night” in the USA (for LCROSS). Astronomers Without Borders (AWB) is partnering with NASA missions and centers and others to bring the excitement of observing and learning about Earth’s closest neighbor in space to the public — putting the “International” into InOMN.

Share the excitement of lunar exploration with the public by hosting your own InOMN event: