This month, weather conditions permitting, skywatchers will be treated to the Perseid meteor shower, several planet conjunctions, a “blue moon” and a relatively rare lunar occultation of Jupiter (visible for some parts of the globe).

The planets Saturn and Mars and the star Spica are close together in the first half of the month, low above the western horizon at dusk. They will form a triangle on the 7th an hour after sunset. Saturn will be the top of the triangle, while Mars will be on the lower right corner. Each side of the triangle is about 5 degrees. On the 14th, they will form an almost straight line: Saturn topmost with Mars lying between Saturn and Spica. 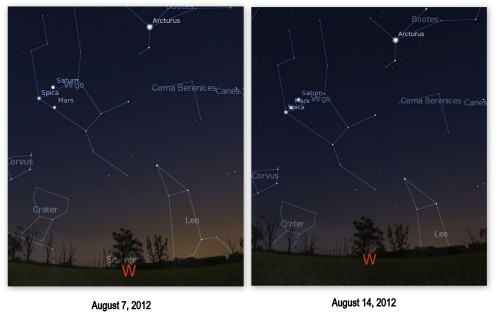 View of the western horizon at dusk on August 7 and 14, 2012 as seen from Manila Philippines. Images were screenshots from Stellarium.

August 12: Occultation of Jupiter by the Moon

For Philippine observers,  the waning crescent Moon will pass in front of Jupiter and its moons during a relatively rare event called occultation on the morning of August 12. In astronomy, an occultation occurs when one object is hidden by another larger object that passes between it and the observer. Prospects and timings for the event vary with location.

The event takes place while Jupiter and the Moon are low in the sky during the wee hours of the morning. 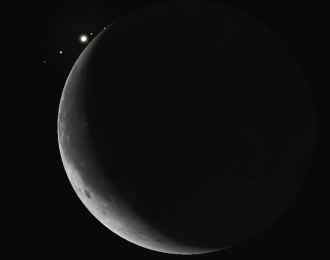 Jupiter and its largest satellites passing behind Earth’s moon.Image: Stellarium

The Perseids is one of the best annual meteor showers.

The best time to watch for Perseids is between midnight and dawn. This is when the shower’s radiant located between the constellations Cassiopeia and Perseus, lies highest in the northeast sky.

By the 12th, the moon will only be 25% illuminated and not nearly as intense as when near its full phase. This will allow fainter meteors to be seen as long as the moon lies outside your field of view.

Tip: Find a safe dark location with clear skies in the early morning hours in order to see the shower. This year, the shower peaks on a weekend so it’s more convenient to stay up late. 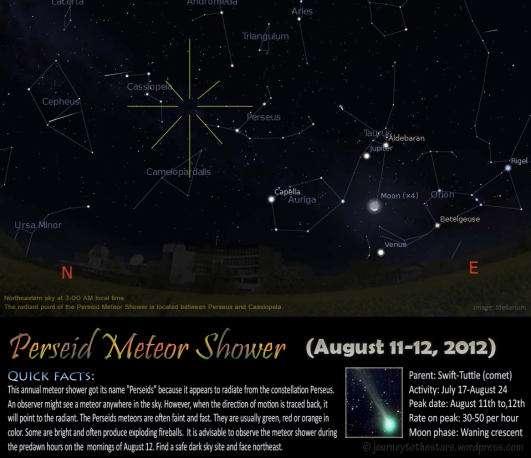 August 14: A line of planets along with a thin, waning, crescent Moon before dawn

Before dawn on the morning of the 14th August the planets Mercury, Venus and Jupiter and the Moon will line up in the eastern sky.  Look for A very thin crescent Moon to the upper right of Mercury an hour before sunrise in the northeast. Venus is to the upper right of the Moon, and a few degrees above them is Jupiter.

On the evening of the 22nd, a waxing crescent Moon, Mars, and Saturn will all lie within a circle just 6° in diameter.

On the 31st, we will be able to witness a Blue Moon, the term given to the second full Moon in a calendar month.  But don’t expect it to be blue — the term has nothing to do with the color of the moon. [Origin of the term blue moon] 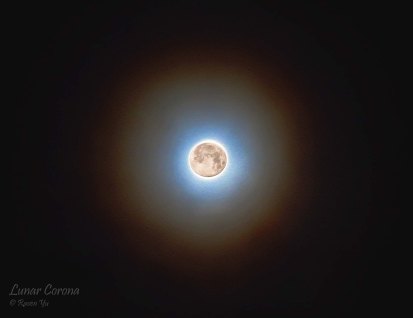 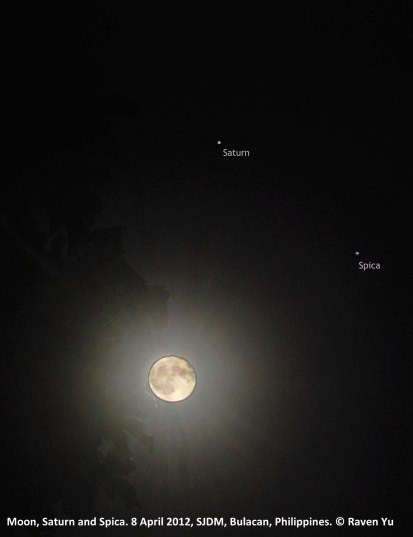 It’s only a made-up one and temporary pairing, but Saturn and the star Gamma Virginis, also known as Porrima, make one of the most realistic close pairs of ‘stars’ in the night sky this season. Their pairing closely resembles a telescopic view of a true double star.

The beauty of this close pairing is that Porrima itself is a true binary or double star, making its proximity to Saturn a ‘double double’ delight. 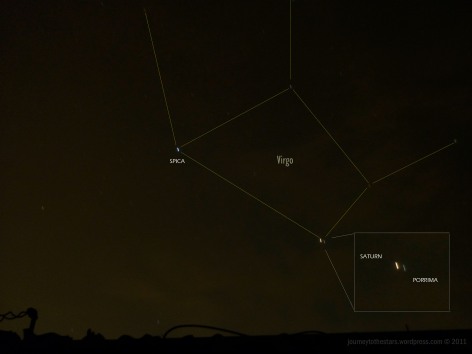 When I took this photo last June 1, Saturn and Porrima appeared as a single star to the naked eye. Zooming into the image revealed 2 separate objects. 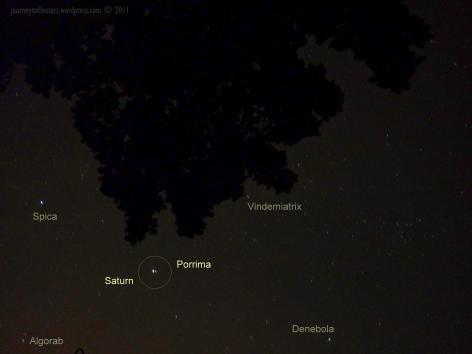 Saturn is easy enough to find. Wait until an hour and a half after sunset, then look for it high in the south-southwest about 15 degrees from Spica. (Saturn will be just a tad brighter and should look yellow compared to Spica’s blue.) For the naked eye observer, watching Saturn and Porrima during June of 2011 provides a terrific opportunity to see a planet in retrograde motion – then pause,  then swing back in its normal eastward path against the background stars.  For the small telescope user it’s even better.  Porrima is a stunning double star when seen in a back-yard telescope – and Saturn, with its rings, the most awesome planet in a small telescope.

You can view a nice close up image of Saturn and Porrima here.

Catch the Closest Celestial Trio of 2010

For Philippine skygazers, here is another celestial grouping before the month of August ends. 😀

Venus and Mars will team up with the star Spica (the brightest star of the constellation Virgo) to stage this year’s closest celestial trio – three heavenly bodies fitting within a circle smaller than 5 degrees in diameter. A typical binocular field covers about 5 degrees of sky, and you might catch all three snuggling within a single binocular field in the early evening from end of August until early September.

After the trio sets in the west, look for the blazing planet Jupiter to rise in the east. After rising, this wonderfully brilliant world will be out all night long! 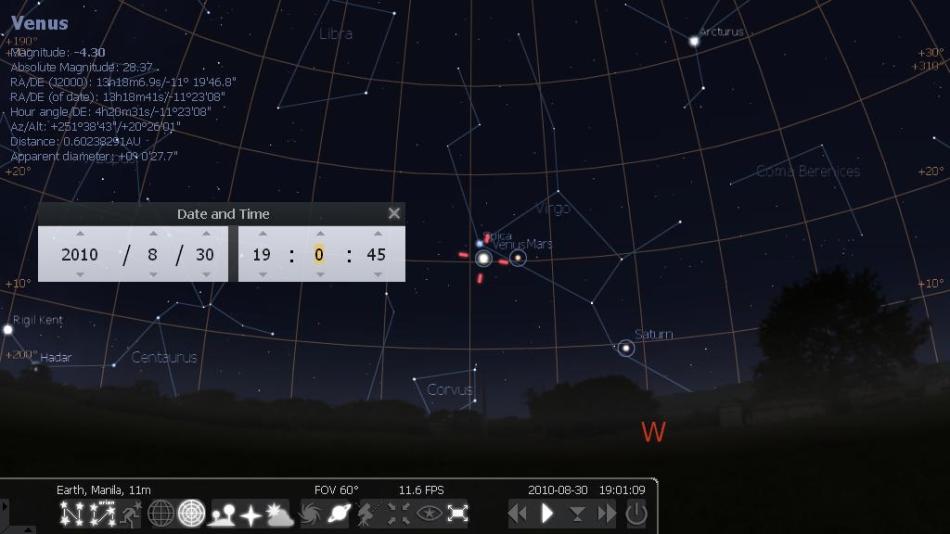 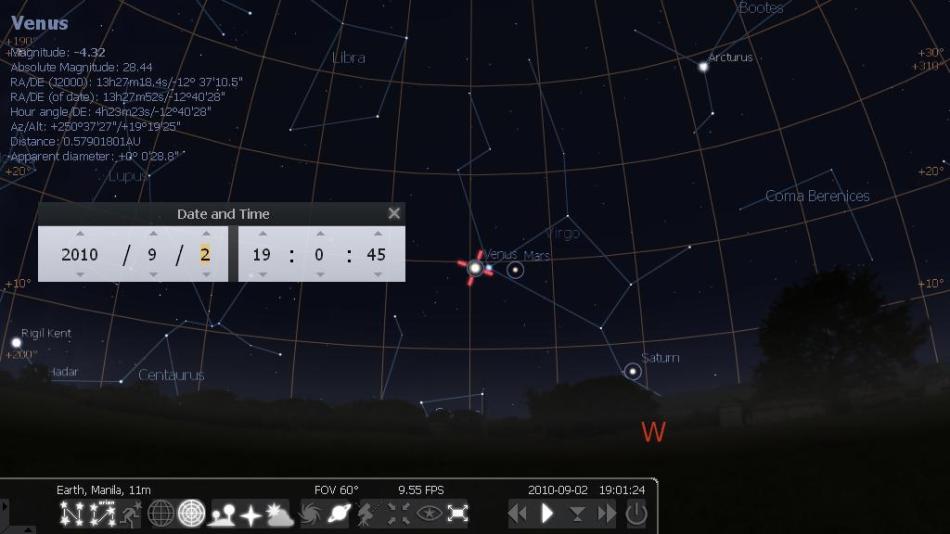 On September 2, the three objects will seem to align in a straight line! 🙂