Last March 17, 2011 , the University of the Philippines Astronomical Society (UP AstroSoc) set up at the PAGASA Astronomical Observatory in UP Diliman to observe the  occultation of the 3.3 magnitude star, Omicron Leonis (or Subra) by the 92% illuminated waxing gibbous Moon.

This event was headed by UP AstroSoc associate member and alumni, Anthony Urbano of EtenyWorks. Kuya Eteny, as the members fondly call him, was experienced in observing occultations.

During this observation, he brought his 6″ Newtonian Equatorial Reflecting Telescope (NERT) with a self-designed home-built clock drive attached to the telescope’s equatorial mount. To record the occultation event, a Canon S3IS connected to a laptop was mounted to the telescope’s eyepiece by means of a fabricated camera adapter. This modified camera can show it’s system time on its on-screen display. According to Kuya Eteny, the default precision of the on-screen timer is limited to 1 second, but a patch, currently made available only for Canon S3IS, increased the clock’s precision to 1/100 of a second — the maximum precision of the camera’s built-in clock. 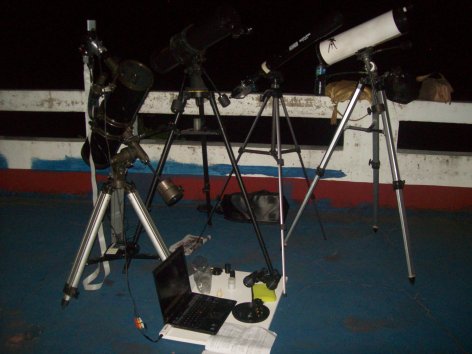 The telescopes set up which included the 6" NERT (left-most)

You can learn more about this improvised clock drive project, the camera modification and  the rest of observation set up by visiting his site where he posts a lot of cool stuff about observation and instrumentation. His inventions are most fit for those amateur astronomers interested in modifying their own telescopes and cameras especially for the purpose of doing astrophotography. 🙂

The event was from 10:20 UT (ingress) and ended at 11:10 UT (egress). Although it can be classified as a ‘bright star occultation’,  the light coming from the target star wasn’t bright enough to pass through the thick clouds during the entire event. By around 11:50 UT, we decided to packed up since there was still no trace of the star near the Moon. 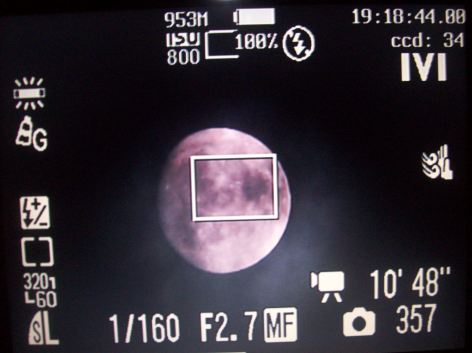 On-screen display of Canon S3IS (with the CHDK firmware upgrade) showing the Moon under the dark patches of clouds. The system time (upper right corner) in this screenshot reads 19:18:44 PST (11:18:44 UT) The occultation event during this time was over, yet there was still no sign of Subra which should be located a few degrees above the Moons upper right limb.

When the Moon passes in front of a background star during occultations, the shadow of the Moon cast by the star sweeps across the Earth. When the leading or trailing edge of the Moon’s shadow crosses an observer, the observer sees the star “disappear” or “reappear”. These events are usually very sudden, and timing the instant of occultation is an important astronomical measurement.

But why is it important to observe lunar occultations?

Aside from occultations by the Moon, there were also Planetary Occultations and Asteroid Occultations. Just as the Moon passes in front of background stars, so too do planets and minor planets (also called asteroids).

While occultations of bright stars by major planets are very rare, occultations by asteroids are a little less so. This is not because any one asteroid has a greater chance of passing in front of a star. Rather, it is because there are so many more asteroids to choose from!

Anyway, asteroid occultations are the only way — apart from spacecraft missions to asteroids and radar observations of nearby objects — to determine the approximate size and shape of those bodies and are, of course, much cheaper.

If, as an amateur astronomer or telescope owner, you would like to be part of history, contribute something relevant to the study of astronomy, or would love to see sights that few have witnessed, then occultations are the thing for you. The occultation process offers discovery and research. It is possible for amateur astronomers to discover new companions of stars, help to improve the polar diameter of the sun and moon, identify the existence of possible satellites orbiting asteroids, to improve knowledge of heights of lunar mountain peaks and depths of valleys in the polar regions, determine corrections to ephemeris errors and assess star position errors, improve knowledge of the shape and sizes of asteroids, and more through occultation science. It does not matter where you live in the world. If you have access to a computer and possess a telescope of at least 4-6 inches, know your geodetic position either from GPS or a good topographic map, have a source of time signals and tape recorder, you can make your own observations of these rare and critical events.

The IOTA web site contains predictions that are updated frequently.

To be able to observe and correctly record an occultation event, you should first have knowledge to find your way about the sky. Most stars that are occulted by asteroids have average apparent visual magnitude of 10.

The program Win-OCCULT, authored by David Herald in Australia, provides accurate predictions of all types of occultations and related phenomena. You can obtain a copy of Win-OCCULT by downloading it from here.

For Philippine observers, a star-moon eclipse will occur on March 17, 2011, from 6:20 pm to 7:10 pm (PHT). The event will be visible to the naked eye, but is best observed with a pair of binoculars, or with an astronomical telescope. 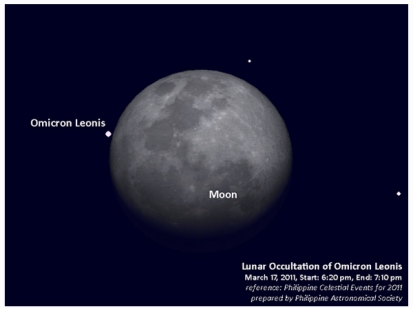 VISIBILITY: This will be the second time this year that OMICRON LEONIS or Subra will be occulted. This time it’s again visible in south-east Asia and the Phillipines but now also Australia and New Zealand can join the party! The star will disappear on the dark side, meaning easy to spot and very interesting to broadcast.

STAR & MOON: Omicron Leonis is a +3.5 magnitude star. The waxing Moon will be 92%, so there is some lunar disturbance. It all starts in Iba, the Phillipines at 10:50 Universal Time. Check the link below, to see when it starts and ends at your location.

LIVE BROADCASTING SCORE: Good. Although the Moon phase is not optimal, this occultation is beautiful to watch mainly because it disappears behind the dark side of the Moon. Another thing that makes broadcasting this occultation interesting is that the white line on the map – locations where the star will disappear and reappear behind the mountains on the lunar edge during darkness- is near the densely populated cities of south-east Australia. So when living near those white lines you should really find yourself a telescope and watch this occultation taking place.

March is filled with several exciting conjunctions, lunar occultations, planetary displays and other celestial events which will take place alongside with some big astronomy-related projects geared toward promoting the appreciation of the night sky to many people globally.

Occultation – An event that occurs when one object is hidden by another object that passes between it and the observer.

Opposition – When two celestial bodies are on opposite sides of the sky when viewed from a particular place (usually the Earth).