Moon and Mars above the Cityscape

As I prepared to observe the Orionid Meteor Shower last October 22, a nice celestial pairing of the waning crescent Moon (22% full) and the tiny planet Mars greeted my view. These two were roughly 8 degrees apart during this conjunction and were located  just slightly above “the Sickle” in Leo.  Unfortunately, the glow from the light-polluted city  made the 1.2 magnitude Mars (on the upper left of the image) difficult to notice with the naked eye.

Mars appears to be like a plain bright red star right now that rises in the east during the wee hours after midnight. In the months ahead, Mars will brighten and will also rise earlier at night. By December 2011, this planet will climb over the eastern horizon before midnight. In January 2012, it’ll be up by mid-evening, and even sooner on February 2012 evenings.

Mars will come closest to Earth in March 2012. It will be out from dusk till dawn, shining about nine times more brightly than it does at present. Even so, Mars won’t be nearly as bright as the planets Venus or Jupiter. 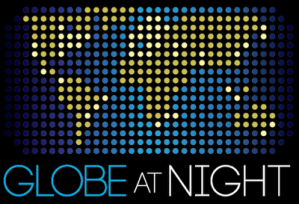 With half of the world’s population now living in cities, many urban dwellers have never experienced the wonderment of pristinely dark skies and maybe never will. This loss, caused by light pollution, is a concern on many fronts: safety, energy conservation, cost, health and effects on wildlife, as well as our ability to view the stars. Even though light pollution is a serious and growing global concern, it is one of the easiest environmental problems you can address on local levels.

Participation in the international star-hunting campaign, GLOBE at Night, helps to address the light pollution issue locally as well as globally. This year, 2 sets of campaigns are being offered. For the first campaign from February 21 through March 6, 2011, everyone all over the world is invited to record the brightness of the night sky. The second campaign runs from March 22 through April 4 in the Northern Hemisphere and March 24 through April 6 in the Southern Hemisphere. The campaign is easy and fun to do. First, you match the appearance of the constellation Orion in the first campaign (and Leo or Crux in the second campaign) with simple star maps of progressively fainter stars found. Then you submit your measurements, including the date, time, and location of your comparison. After all the campaign’s observations are submitted, the project’s organizers release a map of light-pollution levels worldwide. Over the last five annual 2-week campaigns, volunteers from more than 100 nations contributed 52,000 measurements, one third of which came from last year’s campaign.

For activities that have children explore what light pollution is, what its effects are on wildlife and how to prepare for participating in the GLOBE at Night campaign, see the Dark Skies Rangers activities. Monitoring our environment will allow us as citizen-scientists to identify and preserve the dark sky oases in cities and locate areas where light pollution is increasing. All it takes is a few minutes during the 2011 campaign to measure sky brightness and contribute those observations on-line. Help us exceed the 17,800 observations contributed last year. Your measurements will make a world of difference.

At 8.30pm on Saturday 26 March 2011, Earth Hour will celebrate a worldwide commitment to ongoing change for the betterment of the one thing that unites us all – the planet.

Your journey can start here by signing up and adding your voice to the hundreds of millions across the globe who have already spoken with their actions.

Earth Hour started in 2007 in Sydney, Australia when 2.2 million individuals and more than 2,000 businesses turned their lights off for one hour to take a stand against climate change. Only a year later and Earth Hour had become a global sustainability movement with more than 50 million people across 35 countries participating. Global landmarks such as the Sydney Harbour Bridge, CN Tower in Toronto, Golden Gate Bridge in San Francisco, and Rome’s Colosseum, all stood in darkness, as symbols of hope for a cause that grows more urgent by the hour.

In March 2009, hundreds of millions of people took part in the third Earth Hour. Over 4000 cities in 88 countries officially switched off to pledge their support for the planet, making Earth Hour 2009 the world’s largest global climate change initiative.

On Saturday 27 March, Earth Hour 2010 became the biggest Earth Hour ever. A record 128 countries and territories joined the global display of climate action.

This Earth Hour 2011, we are all encouraged to go beyond the hour, so after the lights go back on think about what else you can do to make a difference.

Check out the inspiring Earth Hour 2011 video below to see what the planet’s voice looks like.

Remember, together our actions add up. 😀

To my fellow Filipinos, let’s join the campaign! Check out Earth Hour Pilipinas.

Mark your calendars and plan on joining thousands of other students, families, and citizen scientists counting stars this season! 😀

The Great World Wide Star Count encourages everyone to go outside, look skyward after dark, note the stars in certain constellations, and report what they could see online. Star Count is designed to raise awareness about the night sky and encourage learning in astronomy. All the information needed to participate is available on the Star Count Web site.

Five Simple Steps to Star Count:
1. Determine which constellation to observe
2. Find that constellation at night an hour after sunset (about 7-9pm local time)
3. Match your nighttime sky with one of our magnitude charts
4. Report what you see online
5. View results of this international event

For complete steps, be sure to  download the 2010 Activity Guide (available in 8 languages).

Participation involves use of a simple protocol and an easy data entry form. During the first three years, over 31,000 individuals from 64 countries and all 7 continents participated in this campaign to measure light pollution globally.

What can you see when you look up at the nighttime sky? Do you see stars, constellations, satellites, or the Milky Way? For many people around the world, the Milky Way is something known only through books and pictures, not something visible in their nighttime sky. Astronomers have long known that light pollution impairs our ability to clearly see the night skies and now the general public is also experiencing this phenomenon. Light pollution is often described as an undesirable byproduct of our industrialized civilization. It is a broad term that refers to multiple problems, all of which are caused by inefficient, annoying, or arguably unnecessary use of artificial light. But making it hard for astronomers and amateur skywatchers to view the stars is just one of the problems it causes. According to the website:

At the conclusion of the event, maps and datasets will be generated highlighting the results of this exciting citizen science campaign.

Taking part in this event is free and open to everyone. 😀

Light pollution occurs when artificial illumination washes out our view of the night sky. But making it hard for astronomers and amateur skywatchers to view the stars is just one of the problems it causes. According to the website:

One People, One Sky, One Star at a Time

Preserve and protect the night sky above your observing site, home, business, school or town. Take a stand against the encroachment of the light.﻿

Join the global campaign to reduce light pollution and reclaim the beautiful starry night sky 🙂 I just did.

"Zion - Center of the Galaxy" by TWAN photographer Wally Pacholka/Astropics.com

Reclaim the night sky: One star at a time

Help grow the global unified voice of people committed to unveiling the starry sky for all.
Register pledge at:
http://www.onestar-awb.org/
Goals:
• 1 million pledges this year and
• 1 thousand observing sites registered as part of the Global StarPark Network

The goals are:
#1. An impressive reduction of light trespass between neighbors.
• house to house,
• business to business,
• business to homes, and
• streetlamps to homes

#2. Creation of at least one StarPark* in every community (*an oasis within even a horribly light-polluted community where thoughtful lighting practices permit the best public viewing of the night sky within the community.)
• A tennis court or sports field by day can be used as a StarPark at night if the lighting is addressed.
• New parks could incorporate a StarPark in the original concept design.
• Good neighbor businesses and churches can offer their parking lots as a StarPark at night for great family activitiy.
• Community nature areas can include a StarPark.
• All currently used areas for public observing sessions, including those hosted by local astronomy clubs, are encouraged to register to help build critical momentum.

#4 A StarPark in every national & state park and nature reserve across the globe.

#5 Stargazing/observing listed on all recreational maps along with canoeing, hiking, swimming, fishing, etc.

Intensified across-the-board, across-the-planet, distinctly global at the core~ increased public awareness and activism ~ even if only in it’s simplest form, is the greatest step we can achieve towards a starrier night sky… and profound beginnings.