Situated well above the 88% illuminated waxing gibbous moon tonight were two bright objects — one is the planet Mars and the other one is the star Regulus in the constellation Leo.

These three formed a nice cosmic triangle in the night sky just like what is shown above. (Please take note that the image was a composite.)

Reddish Mars has been in Leo close to the star Regulus for the past few weeks, and the two will remain companions all April. During May and June, Mars will drift away from Regulus, and will head toward the constellation Virgo where Saturn is currently residing. 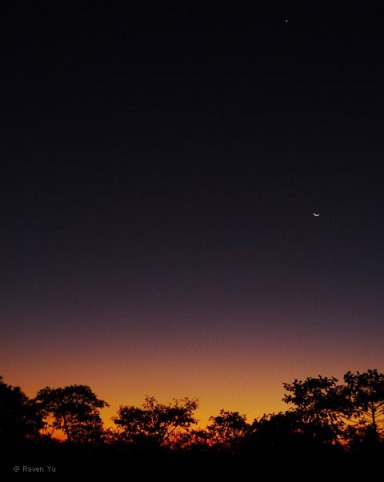 Conjunctions of the moon and the planets are quite special events. 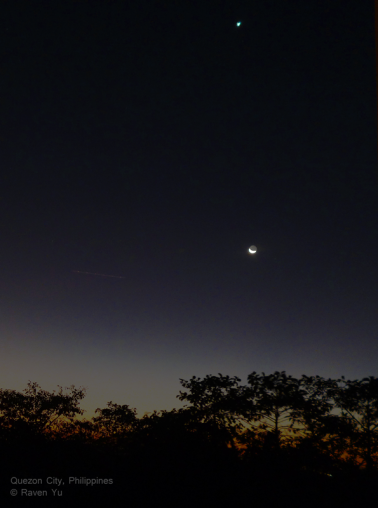 A conjunction is an alignment of 2 or more celestial bodies (usually the moon and planets) in the sky, from our vantage point on Earth. The objects aren’t necessarily physically close to each other in space, but from where we see them, when the bodies are grouped close together on the sky we call them in conjunction.

When the objects get so close together that one passes in front of the other from our vantage point, we call that an occultation.

A conjunction doesn’t have any particularly special meaning, but they can be interesting to observe because very close conjunctions are quite rare events. It can be very exciting to see two planets in the same field of view of your telescope!

Not only that, but conjunctions, especially with the moon and/or bright planets are involved, are just a lovely spectacle to look at and photograph.

On February 25-26, the crescent Moon will join the other two brightest objects in the night sky to form a spectacular celestial grouping during and after twilight! They’re just a few degrees apart at the time of twilight in the west.

This will be a lovely sight to see.

All photos were taken by me using Panasonic Lumix DMC-FH2 digital camera.

As the nights get longer in the northern hemisphere, the skies are filled with good observing opportunities.

Meteor showers, a comet, and Jupiter at opposition are the highlights for October.

Two meteor showers: Draconids & Orionids
*DRACONIDS (Giacobinids)
The Draconids peak will this year on the evening of October 8th with a higher than normal meteor count expected. Periodic (6.6 year orbit) comet 21P/Giacobini/Zinner is the source of these meteors, and this year Earth is predicted to cross a dense debris stream from the comet. Meteor specialists have meteor counts for this pass as high as 500 per hour, radiating from the northern constellation Draco, near the Dragon’s head. This is not without precedent as the Draconids stormed briefly to 10,000 meteors per hour in 1933!
*ORIONIDS

The Orionids will peak this year on the evening of October 21/22 . Periodic (76 year orbit) comet 1P/Halley is the source of these meteors. Meteor specialists have meteor counts for this pass averaging a modest 20 per hour, best visible before dawn under dark skies. These meteor fragments radiate from the top of Orion’s upraised club, near the Gemini border. The waning crescent Moon this year should not interfere much with your observing of these shooting stars.

Comet Elenin
Newly discovered comet Elenin will make its closest approach to the Earth on October 16. The comet was discovered on December 10, 2010 by Russian amateur astronomer Leonid Elenin. It is estimated that the comet will reach 6th magnitude as it makes its closest approach. This will make it just barely visible to the naked eye. With a good pair of binoculars and a little determination, you may be able to get a good look at this new comet during mid October.

Jupiter at Opposition
The giant planet will be at its closest approach to Earth and its face will be fully illuminated by the Sun. This is the best time to view and photograph Jupiter and its moons. The giant planet will be a big and bright as it gets in the night sky. A medium-sized telescope should be able to show you some of the details in Jupiter’s cloud bands. A good pair of binoculars should allow you to see Jupiter’s four largest moons, appearing as bright dots on either side of the planet.

Full Hunters Moon
This month’s full moon is called Hunter’s Moon because at this time of year the leaves are falling and the game is fat and ready to hunt. This will also be the smallest full moon of the year because it will be near apogee, its farthest point from the Earth.

Mercury-Venus & Moon at minimum separation
This is a wonderful conjunction of 2 planets, the waxing crescent Moon and the red giant star Antares about 30 minutes after sunset on the nights of October 28 & 29th. You will need an unobstructed view low to the SW. Use binoculars or a small telescope to locate challenging Mercury.

Join people from all over the world to celebrate the second annual International Observe the Moon Night on Oct. 8, 2011. InOMN is an annual event celebrated globally to encourage people to go out and observe Earth’s nearest neighbor in space — the Moon.

For more information and resources for planning your own International Observe the Moon Night event, visit: http://observethemoonnight.org/. The website features activities, educational materials, multimedia and much more! 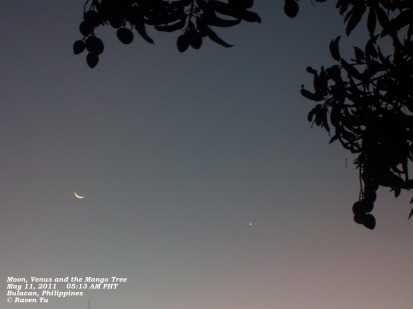 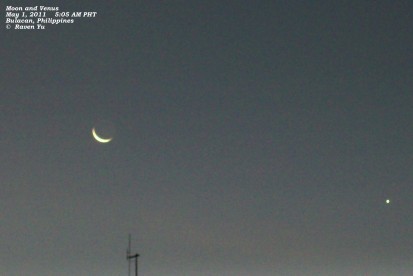 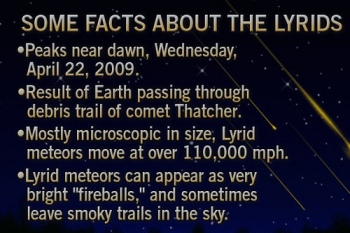 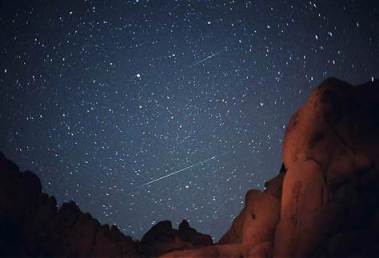 Final Close Pairing of Jupiter and the Moon for 2011 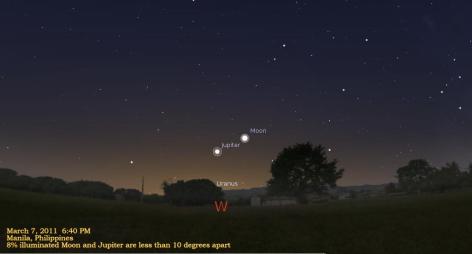 A few minutes after sunset tonight, find the thin waxing crescent Moon near Jupiter in the western sky. Degree of separation is ~8 degrees.

For Philippine skywatchers, Jupiter can be found hanging about 13 degrees above the horizon at 6:40 PM just as shown in the picture. Jupiter is right at the end of this memorable apparition so spot it while you can. It will be lost to the twilight by the third week of the month and in solar conjunction in early April.

Also, if the sky condition tonight is good we may also have the chance to see the earthshine — a smoky glow on the dark portion of the crescent Moon. It is caused by sunlight that reflects off the Earth onto the Moon’s night side and occurs when the Moon is a thin crescent.

I and my friends were about to have our dinner at the very nice Casa Verde Restaurant in Cebu City when we spotted this close pairing of the Moon and Jupiter last February 7, 2011. 🙂 These two objects were roughly about 7 degrees apart.

We were lucky to have seen this conjunction despite the poor sky condition that night. 🙂

Last March 1, the 12% illuminated Moon was about 2 degrees close to the bright planet Venus in the eastern sky during predawn hours.

Due to thick clouds over our place at the time of this celestial conjunction, I did not have the chance to catch a glimpse of  it.

Fortunately, one of my orgmates in U.P. AstroSoc — Anthony Urbano of Eteny Works — was able to observe and take a picture  of these two objects amongst partly cloudy skies.

I really like this image because of its nice purplish color.

Thank you, Kuya Ets for letting me repost your photo. 😀

Clear skies to all!