In hopes of observing the Geminids again, I stayed over at a friend and fellow U.P. AstroSoc member’s house which has a roof deck in Marikina City.

As soon as we were at the roof deck, we immediately looked for the constellation Gemini. Even though the eastern sky was partly covered by thin, hazy clouds and the waxing gibbous Moon shone bright in the night, we were still able to find the stars of Gemini along with the stars of neighboring constellations. My friend, Bea who had her Canon 400D DSLR with her, began taking images of the night sky. You may click on the images to see a higher resolution.

Auriga and Gemini at 10:17 PM (PST) Yellow lines indicate the radiant of the Geminid Meteor Shower 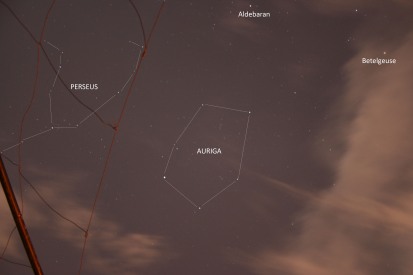 In the northwest, our attention was also caught by the stunning Cassiopeia which was in a slanted “M” position above a dormitory building.

We scanned the rest of the sky for several more minutes and found not a single meteor. About half an hour later, we noticed that the cloud cover was getting worse and it was getting too cold outside. As we were starting to pack up and go inside the house, a lunar corona formed around the setting Moon.

According to Atmospheric Optics site, a corona may be seen when thin clouds partially veil the sun or moon. They are produced by the diffraction of light by tiny cloud droplets or sometimes small ice crystals.

The night sky is really full of surprises. 😀

Jupiter and the moon on August 26

The night sky on August 26 will be dominated by  Jupiter and the waning gibbous moon. They can be seen in the east by mid-evening, after brilliant Venus has disappeared beyond the western horizon. Rising just an hour or two after sunset, Jupiter and the moon can be viewed for the rest of the night among the faint stars of the constellation Pisces the Fish.

With a bright moon passing near them, Pisces’ dim outline might not be visible except from very dark locations. Still,  a prominent asterism – or noticeable pattern of stars – can be glimpsed near Jupiter and the moon on that night. It’s called The Circlet in Pisces.

Jupiter,  is slowly increasing in brightness as it heads towards its opposition and closest approach to Earth in 12 years just next month, September 21 .  This time is the best chance to view and photograph Jupiter and its moons. The giant planet will be as big and bright as it gets in the night sky. A medium-sized telescope should be able to show some of the details in Jupiter’s cloud bands.

Lucky Friday the 13th! — Planet Parade and the 2010 Perseids

Many astronomy enthusiasts gathered last Friday, August 13 to observe the peak of the annual Perseids Meteor Shower as well as the beautiful display of planets after sunset.

My astronomy organization here in the Philippines, the UP Astronomical Society (UP AstroSoc), held a public observation for this event at the Sun Deck of PAGASA Astronomical Observatory in the University of the Philippines – Diliman. It was attended by around 30-40 guest who patiently waited for the Perseids despite the partly cloudy sky before midnight. The org’s telescopes were also set up so the attendees could view the planets Venus and Jupiter (with 4 of its moons!) which were visible during that night.

This observation was even featured in a news report of GMA’s Saksi, a local news program. Below is the video containing  interviews by some of the attendees:

Note: It was mentioned in the report that the planetary conjunction (planets appear near one another in the sky) is difficult to see without the use of telescopes. This is not true because seeing planetary groupings require a wider field of view (extent of the observable area) of the sky. Telescopes offer more details but have smaller field of view than our eyes.

I and two of my colleagues, Andre Obidos and Bea Banzuela, chose to observe from Marikina City. The skies were also cloudy there but we were still lucky enough to see and capture the ghostlike Moon with the planet Venus an hour after sunset in the west. Mars and Saturn however, were too dim to shine through the clouds.

We waited for the constellation Perseus (where the meteors would seem to radiate from) to rise around midnight but the sky was still full of clouds. We went out again around 3am but we saw nothing except for an overcast night sky with just a few bright stars like Altair, Vega and Deneb and the planet Jupiter which was nearly overhead. Following are some our images which were taken using Canon PowerShot SX 20: 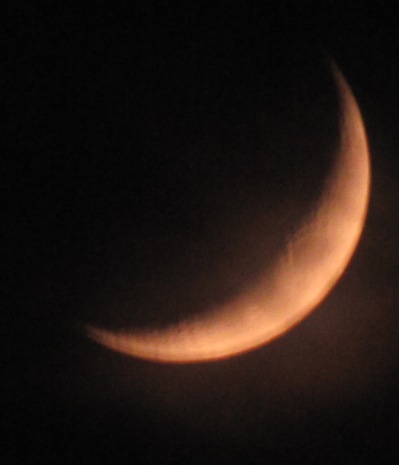 Other members of the organization went to different locations to help facilitate the other public observations of the event.

Below are photos taken by some UP AstroSoc members* during the observations. 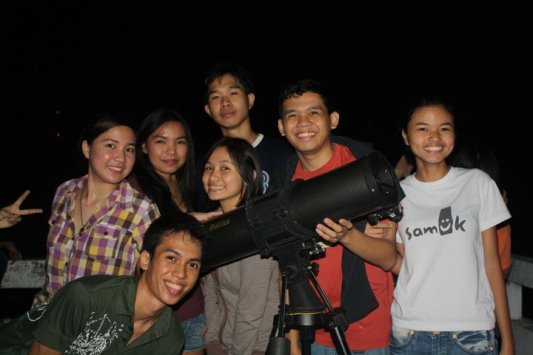 members posing beside one of the org's telescopes 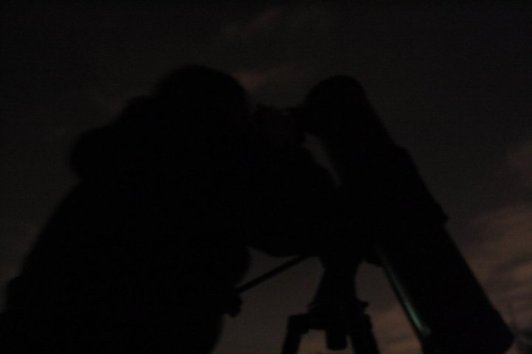 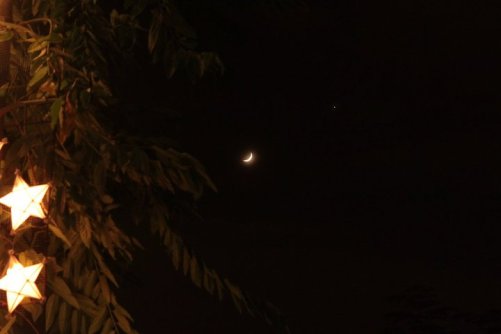 Moon and Venus (viewed from Seven Suites Hotel in Antipolo)

members who went to Los Banos, Laguna posed beside the UPLB AstroSoc banner

Due to the coming of the rainy season here in the Philippines, having a clear night sky this month was almost impossible. Nonetheless, observers were still thankful that the clouds cleared up for even a short while, allowing them to see 4 or more of those beautiful bright streaks of light with the planets. 😀

According to the IMO measurements  the 2010 Perseid meteor shower was above normal with a peak activity of over 100 meteors per hour under optimal viewing conditions but not spectacular. In the coming nights the Perseids will still be visible, but with fewer and fewer meteors night by night.

Ana Geronimo (in UP Diliman)

All photos were used with their permission. 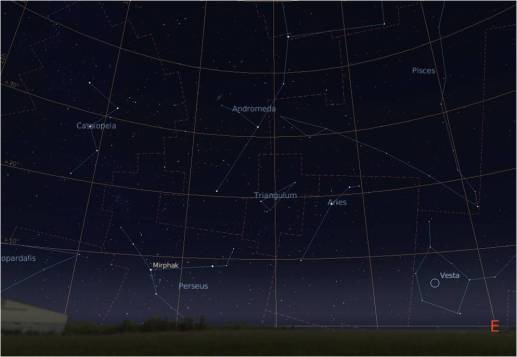 One People, One Sky, One Star at a Time

Preserve and protect the night sky above your observing site, home, business, school or town. Take a stand against the encroachment of the light.﻿

Join the global campaign to reduce light pollution and reclaim the beautiful starry night sky 🙂 I just did.

"Zion - Center of the Galaxy" by TWAN photographer Wally Pacholka/Astropics.com

Reclaim the night sky: One star at a time

Help grow the global unified voice of people committed to unveiling the starry sky for all.
Register pledge at:
http://www.onestar-awb.org/
Goals:
• 1 million pledges this year and
• 1 thousand observing sites registered as part of the Global StarPark Network

The goals are:
#1. An impressive reduction of light trespass between neighbors.
• house to house,
• business to business,
• business to homes, and
• streetlamps to homes

#2. Creation of at least one StarPark* in every community (*an oasis within even a horribly light-polluted community where thoughtful lighting practices permit the best public viewing of the night sky within the community.)
• A tennis court or sports field by day can be used as a StarPark at night if the lighting is addressed.
• New parks could incorporate a StarPark in the original concept design.
• Good neighbor businesses and churches can offer their parking lots as a StarPark at night for great family activitiy.
• Community nature areas can include a StarPark.
• All currently used areas for public observing sessions, including those hosted by local astronomy clubs, are encouraged to register to help build critical momentum.

#4 A StarPark in every national & state park and nature reserve across the globe.

#5 Stargazing/observing listed on all recreational maps along with canoeing, hiking, swimming, fishing, etc.

Intensified across-the-board, across-the-planet, distinctly global at the core~ increased public awareness and activism ~ even if only in it’s simplest form, is the greatest step we can achieve towards a starrier night sky… and profound beginnings.